Posted on October 30, 2009 by Saddlebags and Backpacks - a brewer's outdoor adventures

Wednesday this week found me with a few days off work, the kids packed off with the grandparents and my wife on a course in distant Swansea. Guilt free walking doesn’t raise its head very often and so I needed no second invitation. After checking the forecast the night before (good visibility, light winds, sunny intervals and mild) it was all systems go for the morning.

On Wednesday morning, I grabbed my kit and jumped into the car, hurriedly mumbling a good morning to the In-Laws as I breezed past them, and set off for Brecon. Arriving in reasonably good time (via the Tuck shop), I then had the quandary of realising that I hadn’t actually decided on where I was going to walk for the day. I played it safe and drove along the A470 to Storey Arms and parked the car. Glancing at the massif comprising Corn-Du and Pen-y-Fan, I realised that there was a bit of clag hanging around the 800m mark and above. That made the decision very easy then, I was going to head in the opposite direction and make my way up to Fan Fawr on the other side of the A470 and then make it up as I went along.

I was going for a very impromptu and unplanned route and see where my feet took me. There is a freedom in not having a prescribed route. Conversely, and perversely, it also meant paying a lot more attention to the map as I would be slipping on and off paths all day depending on where my Muse took me. I made my way up around the spur of Bryn Du and then up the south slope of Fan Fawr. I looked south to see three glittering reservoirs and spied heavy dark clouds that way.

I also looked to the West and towards the less frequented part of the Brecon Beacons, my loose destination for the rest of the day. I spoke the names aloud to myself, Fan Dringarth, Fan Llia, Fan Nedd, Fan Gyhirych and just on the horizon line Fan Hir and Fan Brycheiniog. I knew the last two were way beyond the scope of the day and Fan Gyhirych too probably. I didnt matter, just seeing those peaks and ridges lined up one after the other whetted my appetite and a faraway smile played on my lips. Shaking myself from my reverie, I made my way along the ridge of Fan Fawr towards the trig point. 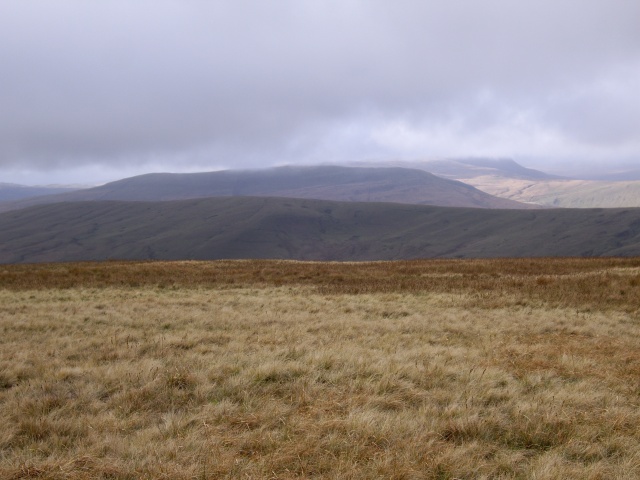 On my way I came across three fellow walkers coming the opposite way. They were dressed for winter, adverts for Paramo, and it made me sweat just to look at them. The wind was light, the temperature even up at 2500feet in the mid teens Celcius and no rain. Bizarre. Having said that I am sure they must have looked at me with just a short sleeved baselayer, Ron Hill tracksuit trousers and trail shoes on and muttered something about loony lightweight faddists….. Pushing on, I made my way down into the valley that feeds the Ystradfellte reservoir across pathless rough grassland and geared myself up to find a crossing point across the Afon Dringarth stream.

In any case the crossing was easy and nicely placed boulders meant I kept my feet dry this time. I then made my way up the flanks of Fan Dringarth and found myself on a plateau with grand views all around. 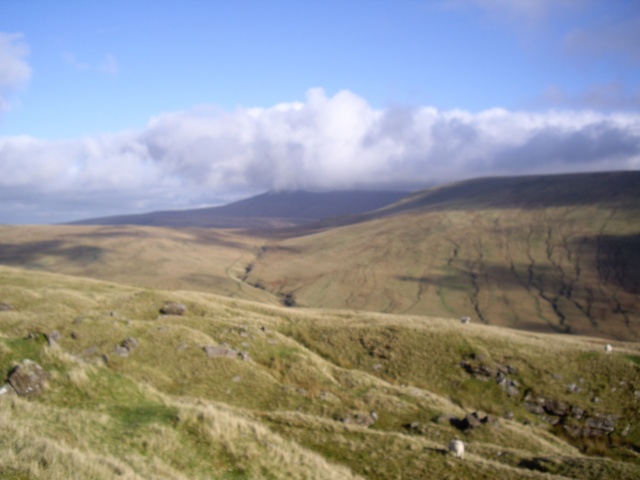 After taking in the scenery for a while, I walked along the ridgeline to Fan Llia and then dropped down into the valley on the other side, crossing the thin road that follows the Afon Llia and finally up to the summit of Fan Nedd. looking at the time and the distances I needed to cover to get back to the car, I decided that pushing on towards Fan Gyrhirych would be pushing it indeed. A wistful glance towards her distinctive shape and then I went back down into the valley, across the road again and up towards the Craig Cwn-du promontory.

I now picked up the Beacons Way and found the going reasonably good, so much so that I actually ran for a couple of miles. It felt good to push myself and even though the slope kept rising steadily the track was fine and easy to traverse. Having sated my urge to run for a while, I slowed to a brisk walking pace again as I reached the top of the ridge at Fan Frynych. The ground underfoot started to become very muddy by now, the slurping sliding kind of mud that laughs at walkers and their fancy expensive boots and shoes. My Montrail Streaks were no exception and got a thorough caking in the stuff although to be fair I was looking to test them out in all kinds of terrain during the day to put them through their paces so to speak.

I rounded Craig Cerrig Gleisiad and back towards Craig y Fro and the route back to the car. Who says the Brecon Beacons are just rounded grassy humps? The escarpment all along the pathway was sharp, steep, rocky and precipitous so that I had to keep my wits about me as the pathway was but 2 feet from the edge.

Finally I made my down towards the car park passing a small stream cutting its way down the hillside along the way. The two trees that were there already had their winter apparel on.

The burger van opposite my car wafted enticing smells in my direction but I resisted instead prefering to munch on a couple of museli bars. I then stripped off and critically examined my Montrail Streaks which were wet, soggy, caked in mud and yet had kept my feet comfy all throughout the day. They had been through the mill and had performed well though having read my previous post you already knew that…. Finally I started the car and drove back towards home happy in the knowledge of a good day out and the prospect of a lovely drive home.

I am a keen hiker, camper, cyclist and general all round gear addict..... I also manage to be a professional brewer in my non-spare time :->
View all posts by Saddlebags and Backpacks - a brewer's outdoor adventures →
This entry was posted in Walks. Bookmark the permalink.