A Black Mountain Bothy Trip in December…..well not quite

Posted on January 5, 2012 by Saddlebags and Backpacks - a brewer's outdoor adventures

This is a report for A Black Mountain Bothy trip back in December. Ok, well it started out like that but ended up being slightly different. I’ll try not to spoil the story but we didnt manage to get in the bothy, we camped. Damn, I’m going to have to pad this one out a bit I think… It was one of those spur of the moment things that although it did change ended up being a great little trip, and this is how it went.

Imagine the scene. Pre-Christmas run-up at work, Thursday, a little after 11pm. 2 colleagues sat at a table in the works canteen.

Chris: just got a phone call from a mate

Chris: Wants to go camping in the Brecon Beacons on the weekend

Dave: Know where you are going?

Chris: Not a clue

Dave:  Uh, what if I told you about a great place to go?

Dave: Yeah. But you might struggle to find it without a guide

Dave: Well, its a bit late notice and its nearly Christmas and all…..

3 people gathered in The Skirrid Inn at Llanvihangel Crucorney on Saturday afternoon supping a pint of real ale and grinning inanely at each other. Plans had come together very rapidly in the preceding 48hours with passes given, food collected and firewood bought. We knew that the destination of Grwyne Fawr Bothy was chancey in that there was always a likelihood of it being occupied. Still that was our goal but we prudently brought our tents as back up.

After parking the car, donning rucksacks and dolling out the wood we had bought for the bothy, it was time to do the 3mile walk in. Along the way we passed by the massive dam of the Grywne Fawr Reservoir, up the embankment and then along the side of its silent waters. As we neared the bothy, our hearts sank, there was obviously someone in there. Still, we reasoned, it might only be one or 2 people and I knew the bothy could take 5 or 6 at a push. As we reached the bothy, the door opened, light and warmth spilled out, along with 5 lads. Bugger. They were amiable enough but there was no way we could cram 8 of us in there. After 10minutes of polite conversation we decided to bring plan b into action.

The start of plan b didnt begin very well. This involved us crossing the stream feeding the reservoir and climbing up to some natural terracing 500metres away. Easy enough but by now it was dark and in my most helpful mode I threw the biggest bundle of wood over the stream to the other bank. Bounce, bounce, splosh. The woodsack sailed over the stream but then bounced into a small pool. Bugger, bugger, bugger! Throwing caution to the wind I strode through the stream to rescue the wood before the water had time to seep in too much. The others looked at me. I looked sheepishly back. Still, we werent going to let that dampen the mood and we soon climbed to an area that was flat, had a bank of earth and stone to one side, a great view of the reservoir and not too damp underfoot.

Camp was soon made ready and then we built the fire. It did actually catch fire and the wood did manage to burn, even the damp logs (phew). The flames danced hypnotically and we managed to cook and eat our evening meal in the glow of a real fire (bliss). Of course, this was a bit of a social affair and so the cider, ale and wine were then produced to be sampled, shared and generally quaffed. The wind was up on the high hills but our spot was reasonably sheltered and the stars came out to give us a silver twinkling reflected in the dark water of the reservoir below. After a great evening conversation, talking about live the universe and everything, we had a last brew up and then off to bed.

At this point, the other two retired to their tents and zipped them up against the night. For me, I snuggled under my tarp configured in the A-frame poor weather mode coccooned in my sleeping bag and cover. I had rigged my tarp so that I had a foot of room between the head end pole and the start of the tarp cover. This allowed me to lie on my back, head projecting out from under the tarp and stare up at the sky. I spent another hour just gazing up and allowing my mind to wander. When I found sleep starting to come over me, I simply slid my sleeping bag and cover back under the tarp and closed my eyes. Heavy rain briefly woke me around 3am but apart from that I slept soundly. 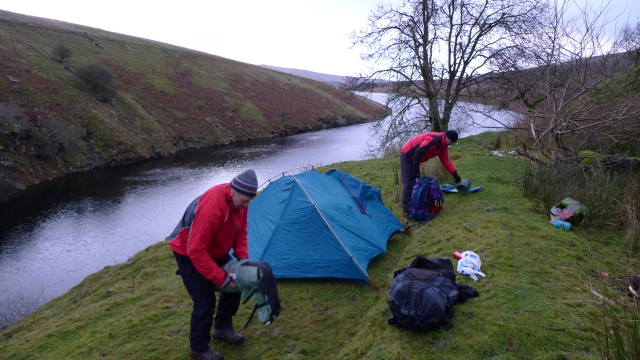 The morning found us all waking up around 7am and the usual stamping of feet and encouragement of circulation. It wasnt cold but the air was very damp so we all wanted to eat breakfast and pack up as soon as possible.

The tarp had worked well enough although in wet weather mode, there isnt a lot of room underneath. I have since bought a slightly larger tarp and intend to add removable beaks to this as well to give me a few more cubic feet of room and options against the elements. In the background to the picture (above), you can just about make out the bothy that we couldnt get into the night before. Having done breakfast and several large cups of coffee, it was time to have a short walk and then head back to the car.

As we made our way along the high pathway from the reservoir, we could see the low hanging cloud which promised rain and poor visibility.

Having said that, we were surpised that not long after, the cloud lifted above the peaks and the light levels rose along with visibility. We happily strode our way back to the car commenting on the shame of the bothy being full, the success of the fire (yours truly not withstanding) and the sheer fun of doing a last minute camping trip in December. We all had chores to do upon our return as payback for the time away although I reckon Chris copped it worse having to lay laminate flooring in 2 rooms. Just before setting off for our respective houses a little later, we all agreed that we needed to do it again and this time to turn up at the bothy early.

I am a keen hiker, camper, cyclist and general all round gear addict..... I also manage to be a professional brewer in my non-spare time :->
View all posts by Saddlebags and Backpacks - a brewer's outdoor adventures →
This entry was posted in Trips and tagged Black Mountains, campfire, Grwyne Fawr Bothy, Grwyne Fawr Reservoir, tarp. Bookmark the permalink.